There’s a sound of discontent among Christians this week. Oh, come on – we’re ALWAYS discontent about something. So what is it this time? This time it’s because of First Baptist Church in Dallas. They held a “Celebrate Freedom Rally” during 4th of July weekend.

And during this 2-hour glut fest of raw patriotism and nationalism, the choir unveiled a new anthem called “Make America Great Again.” That’s really not what has people so upset – churches do patriotic services ALL THE TIME. I think what really got people’s knickers in a twist was how fast the song was copyrighted and listed on CCLI (Christian Copyright Licensing International), the organization that “provides information and resources for churches and copyright owners around the world, relating to copyrights of Christian worship songs” (THEIR WORDS, NOT MINE).

Their launch screen is all about worship!

Like, not at all. It’s only about the country and restoring its greatness and glory. 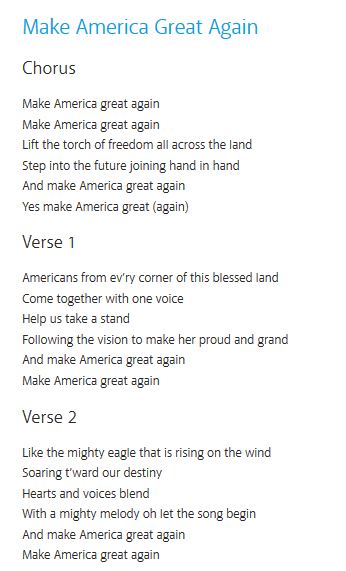 In a word, it’s idolatry. Any time you elevate something and worship it as equal to or in place of God you’re committing idolatry. Sure, it wasn’t a “worship service.” Well, it was, just not a worship service where God was the object of worship. Evangelicals have a bad habit of conflating patriotism and faith. Loving America does NOT make us better Christians. Loving God does NOT mean we’re going to love America (otherwise, Christians all over the world in foreign countries are in for a WORLD of disappointment when they reach heaven).

America has become our Golden Calf.

And, sadly, this is not new. A quick search for the word “America” on CCLI and I have a results list of 192 songs.

Really? This is supposed to be our worship archive, guys! The Bible is pretty clear that our worship belongs to God and God alone. He got pretty ticked with that whole calf in the wilderness incident. And if this idolatry has become the norm for Evangelicalism, then I am ready to call American Evangelicalism a dead religion. I’m done with it and all of the garbage that comes with it.

Jesus transcends nations. His worship demands WE transcend nations. I’m not saying we shouldn’t be patriotic. I’m saying we’ve lost the ability to see the line between patriotism and idolatry.

And that’s not okay.

Recently I had a conversation with a Christian friend who made the statement, “When it comes to the core elements of what makes a Christian, it’s a toss up for me between the Bible and Jesus Christ as Savior.” 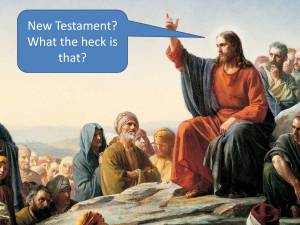 I stopped him fast and said, “Whoa, there! Jesus is far more important than the Bible.”

Before you stone me as a heretic, hear me out.

Between the Ascension and the writing of the first book of the New Testament there is a gap of roughly 20-some years. The New Testament wasn’t even finished for decades after that, then even more time for the book to be compiled into a single volume.

In fact, it wasn’t until the 16th century and the printing press that we had the ability to put the entire Bible in everyone’s hands.

So the question is, “What did the Apostles preach before the Bible was written, completed, and disseminated?”

Easy – they preached Jesus! Jesus is the common denominator among all those who would consider themselves Christians. Jesus is God incarnate. He physically died as a substitution for humanity. He rose again, defeating death once and for all.

Peter once preached that there is no other name than Jesus by which we must be saved. That’s it. If you don’t hold to Jesus, you don’t fall under the title Christian.

Yes, I believe that the Bible is inspired by God. It tells the story of God redeeming humanity. It is God’s Word to us. But people have been getting saved without having a Bible since the beginning of the faith. Let’s not turn the Bible into an idol.

It’s all about Jesus!