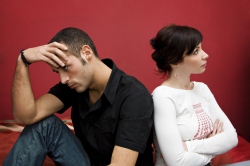 Someone once asked me if I could describe the Gospel in just two minutes.

Yes. You see it all comes down brokenness. We are broken people and we live in a broken world. But brokenness isn’t God’s design or intention. It’s the same when it comes to marriage. N.T. Wright notes that anyone who even reads the words of Jesus out loud will most likely be called mean, unforgiving, Pharisaical, or worse. Jesus said:

And we cannot deny the words of Jesus. He clearly says in Mark 10:

At this point everyone who is divorced or who has been affected by divorce in some way shuts down, turns off their ears, and stops listening to the message.
That’s what often happens.

But that’s because preachers who read the words of Jesus in this case never go all the way with the Gospel. Hear me out.

And he left there and went to the region of Judea and beyond the Jordan, and crowds gathered to him again. And again, as was his custom, he taught them. And Pharisees came up and in order to test him asked, “Is it lawful for a man to divorce his wife?”

These guys have no real concern about understanding God’s truth about marriage and divorce. Jesus is now in the area that John the Baptist had been when John condemned the behavior of Herod marrying his brother’s wife, Herodias. John told Herod, “This is not right!” But that’s just John. He tended to get emotional.

In fact, you could say he lost his head.

When the Pharisees approach Jesus they’re trying to put in in a tough spot on Herod’s turf – wanting him to make a declaration about marriage and divorce that will get him killed. But Jesus doesn’t fall for it.

He answered them, “What did Moses command you?” They said, “Moses allowed a man to write a certificate of divorce and to send her away.”

In the ancient world the certificate of divorce was a way of saying that the husband gives up his right and claim on the woman. Another man can have her without fear of the husband coming after him. There’s only one passage in the Torah that explicitly addresses divorce. Deuteronomy 24:1 says,

“If a man marries a woman, but she has become displeasing to him because he finds something improper about her, he may write her a divorce certificate, hand it to her, and send her on her way from his house.”

They missed the bigger picture.

And Jesus said to them, “Because of your hardness of heart he wrote you this commandment.

The law passed down from Moses doesn’t declare divorce right or wrong – it simply assumes that divorce is a fact of life and seeks to protect the wife. The certificate of divorce meant when she remarried she would not be accused of adultery. But Jesus tells them that this was not God’s original design and intent.

But from the beginning of creation, ‘God made them male and female.’ ‘Therefore a man shall leave his father and mother and hold fast to his wife, and the two shall become one flesh.’ So they are no longer two but one flesh. What therefore God has joined together, let not man separate.”

The problem is not with God’s ideal or the Law – the problem is with people and their hardened hearts. We are broken people who live in a broken world. That means we will do broken things to each other. This is not the way God designed it to be – it’s a sad fact of brokenness.

And Jesus does an amazing thing here. Instead of simply ruling out divorce he elevates the idea of marriage. It’s not about how and when you can split. Jesus says that the way God designed human marriage to work is for two to lose their individual identities and understand that they are now part of the same person. Jesus puts marriage on a whole new level.

If this is God’s design and intention, who is man that we should split it up?

And that’s where most preachers stop. And people listening who have suffered through a divorce shrink lower and lower into their seats. But that’s not the end of the Gospel.

You see, the Gospel is about restoration and reconciliation. The Gospel says, “You matter enough to God that He paid the price to fix your brokenness – a price you could never afford.”

The Gospel says, “The only thing that is unforgivable is blasphemy against the Holy Spirit.”

That means that divorce, though not God’s design and desire,
is not an unforgivable sin.

That means that, as a divorcee, you can rest assured that God still loves you and that you are not separated from Him because of your marital status.

That means that, as Christians, we can treat friends and family with love and respect even when they have gone through divorce and remarriage.

The Gospel is bigger than all of us, and God’s grace reaches farther than we could ever imagine. We are called to be people of reconciliation and restoration. When we deal with people who are divorced or going through a divorce. When we live the life of a divorcee. God’s grace reaches to us all and calls us to act towards each other with that same grace.

‘Cause it’s only when we’re acting with this kind of grace
that we’ll see true reconciliation and restoration happen.

Related Posts:
– Beyond Divorce: Living After Heartbreak and Separation
– I QUIT! What to Know Before You Divorce

29 Replies to “Calling It Quits: What Jesus Says About Divorce”