Have you ever heard of life hacks? They are simple things that you might never have considered that seek to make life easier. For example:

C’mon, now. This one is pure genius! No more wasted Nutella! 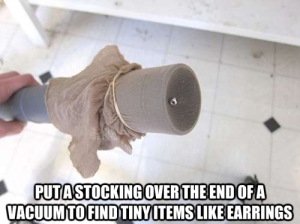 If you’re like me then you’ll accidentally have sucked up plenty of small things while vacuuming the floor: Legos, jewelry, paperclips, you name it. This simple lifehack can help you.

Shortcuts for making life easier. But sometimes we aren’t meant to take shortcuts in life. Take the ancient Israelites, for example.

When Pharaoh let the people go, God did not lead them by way of the land of the Philistines, although that was near. For God said, “Lest the people change their minds when they see war and return to Egypt.” But God led the people around by the way of the wilderness toward the Red Sea. And the people of Israel went up out of the land of Egypt equipped for battle. Moses took the bones of Joseph with him, for Joseph had made the sons of Israel solemnly swear, saying, “God will surely visit you, and you shall carry up my bones with you from here.”

Here are two things we can learn from this:

1. The fastest way is not always the best way or God’s way.

There was a way Israel COULD have taken but God led them a different way – a longer way: The human tendency is to believe that being forced to go the long way through something means that God is not present or that God is punishing us. But here is an example of God

taking people the long way around FOR THEIR OWN GOOD! In our personal lives sometimes we feel like we need a shortcut to get where we want to go and we get frustrated when we’re forced to go the long way. Maybe we’re waiting for a job. Maybe we’re waiting for an apology. Whatever the area of life, we like to have it our way. We want the Burger King life.  God isn’t a fast food employee. Sometimes His way is slower than the way we want. Do we have the faith to trust Him when we don’t get the shortcut we want?

2. The slow way may be preparing us for the battles to come.

If the Israelites had seen war too soon they would have turned back to Egypt. There is an interesting concept here, and that is that the human element makes a difference in God’s possibilities: we can go along with His plan or we can go against Him. This is not to deny God’s sovereignty – this is simply saying that we have the ability as free agents to walk away from the good plans God has for us. Even Jesus was limited by human rejection when he went to minister in his hometown. Because of the lack of faith he was only able to do a few healings. Was his power limited? I don’t think so. I think that humanity has the choice to embrace what God is doing or to walk away.

The Israelites left Egypt equipped for future battles, but God was holding it back until they were ready. Our detours and long way around might seem frustrating when we want to get there NOW, but we have to trust that God is using this time to prepare us. Just because you’re being delayed does NOT mean God has abandoned you. Notice that God is present with Israel day and night (cloud and fire). Even today we have his assurance that He is with us. His presence has not departed just because we’re taking the long road.

So here we are. Whatever desert you’re going through, whatever delays you’re facing, know that God is still walking beside you. Perhaps this time is being used for your own good and you simply can’t see it yet. Persevere. Hang in there. One day you’ll get to where God is moving you to go. In the meantime, walk in faith following His lead.