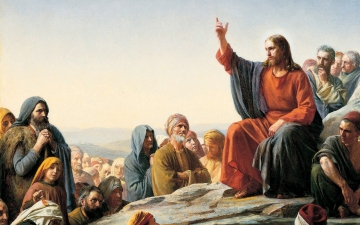 As a wrap up to the project, we answered 5 questions. I’ve added Eric’s answers without edit (so blame him if you spot a grammar mistake!). Ultimately, this project was not about telling Jesus to shut up. Many people tend to ignore or shut him up when his words clash with their lives. Rather, Eric and I wanted HIS words to be heard anew. So here you go:

Why did you want to do this project?

ERIC: I actually started this project at the suggestion of my friend, Todd. It kept coming up in discussion several weeks prior how Jesus’ Sermon on the Mount is controversial, even today, and how even many Christians are offended by things that Jesus in this particular sermon. Todd suggested posting it verse by verse or section by section without any commentary just to see how people react. Sort of give people a “slow reading” of it. I prayed over it and had absolute peace about doing it. So, it began…

CHRIS: For me it started when I saw the Facebook thread between Eric and Todd. They were talking about posting the Sermon on the Mount (SotM) piece by piece every day. I thought it was a great idea for a couple of reasons. First, the SotM was not originally a unified message given at one time. It’s a collection of the teachings of Jesus that Matthew compiled wrote out. Posting it on social media bit by bit would have been close to the way Jesus taught it – little bits at a time rather than a multiple chapter treatise on ethical and moral behavior. Second, with all of the negative junk that’s posted every day, I wanted to be one of the voices posting things that build up and develop people. True, Jesus’s words aren’t words of encouragement, but they can build us up spiritually, morally, and ethically.

Did you have any difficulties carrying it out?

ERIC: My greatest difficulty was remembering where I left off the day before! I would do it first thing in the morning, and sometimes I wasn’t fully awake! LOL!! But the greatest difficulty for me, personally, was just the weight of Christ’s words. They’re heavy at times. In giving others a sort of “slow reading” of it you force yourself to read it slowly and REALLY consider what Christ is saying! Matthew 5:44 was particularly heavy for me. During this time it seems like I had enemies coming out of the woodwork. And here’s Jesus telling me to pray for them! NOT EASY! Certainly challenging! But, I submitted and did it!

CHRIS: There were two difficulties. The first isn’t a big one – it was the difficulty of developing the habit of the daily posting. Probably 2/3 of the material I posted in the moment. I smartened up eventually and began to schedule posts in advance so I wouldn’t forget. Advanced scheduling, though, was part of the second difficulty: how to break up the material. Microblogging sites are geared towards snippets of material, and some of Jesus’s longer teachings are too long for social media. So I played editor a little bit in determining what the blocks of text would be and what would have to wait for another day. I also took some liberties to shorten the text, using & for “and” and sometimes omitting punctuation, indefinite articles, etc.

Were there any surprises from the experience?

ERIC: Yes. When I posted Matthew 5:31-32. While I was expecting some discussions to erupt over topics such as enemy love, loving your neighbor, or even the “Not everyone who says to me, ‘Lord, Lord’ will enter into the kingdom of Heaven….” I was NOT expecting these two verses to stir any turds! People were leaving comments like, “So, what you’re saying is I’m a sinner because I got divorced?” No! I didn’t say that! I was just merely quoting Jesus, what He said in scripture! I actually had some family members REALLY upset with me over that! They were divorced. Even after I explained the project to them they was like, “Well, you still could have just skipped over that one!” Which really goes back to some of the conversations that Todd & I had: The Sermon on the Mount touches everyone and will offend you!

CHRIS: The biggest surprise was how passionate some people got over the message of Jesus. And it wasn’t always positive passion. One person asked me angrily (at least it felt that way reading the words on Facebook) why I was doing this. Others seemed to chafe at particular points of Jesus’s words that had direct correlation to their life’s circumstances. One minor surprise was a friend who took issue with me putting out the words of Jesus but NOT including the biblical address. My simple answer was that the Bible originally had no chapter and verse divisions – those were a later addition. The key is the content, which had been passed down from Christian to Christian for hundreds and hundreds of years before the addition of chapter and verse markings.

What did you learn?

ERIC: A couple of things: Scripture is challenging enough. You don’t always need to add your commentary to challenge others. The other was not everyone is going to agree with Jesus. Some will boldly oppose Him on issues because they want to be comfortable in their sin.

CHRIS: The biggest thing I learned is that the words of Christ are as relevant today as they EVER were thousands of years ago. They are literally timeless, reaching into the heart of some touchy subjects 21st century Christians wrestle with. To quote the Bible (and not give you the address), “There is nothing new under the sun.” We can preach Jesus until the end of time, because his words will always touch us at the core of our humanity.

What do you hope others learned?

ERIC: The first is enemy love. I’m looking at the Church, watching it’s agape growing cold, growing more hostile. Of course we see that the clearest in the political field. The ones on the right who are the most vocal about their Christianity are also militantly hostile towards those on the left. If you are a TRUE Christian then the left isn’t your enemy. It’s your mission field.

Which leads me to the 2nd thing I hope people took away: Matthew 7. This chapter plays a central role in my personal worldview & ministry. Matthew 7:13-23 Jesus is speaking of Christians. I was REALLY hoping that people would pay close attention to how Jesus uses the words “many” and “few” in those 10 verses! Because if you read that carefully, pay close attention, that should cause you as a Christian to gut check yourself. Not everyone who calls him “Lord” will enter into the Kingdom of Heaven. The past to destruction is wide and many are on it. Many will say unto Him in that day, “Lord, Lord, have we not _____ in your name?” I don’t know about you, but I want to be a part of the few who find that narrow way, and I want to point others towards it so that they may enter into the Kingdom of Heaven.

CHRIS: I hope other people were able to see the broken down teachings and really let them sink in without the noise of contextual sermonizing or other texts. The words of Christ stand alone, and they have power…if we heed them. Otherwise we’re like the foolish man who built his house upon the sand.

There you have it, folks. Have you ever read the Sermon on the Mount? What do you think? How did it hit you?